Results from Tourney and NU open event this weekend —

We had a solid turn-out and very competitive tennis over the two days.

The Mixed Dubs saw the brother/sister team of Nicole/Anthony Jackson prevail over the Phipps in the Finals — David (a winner in the 4th of July tourney and Evanston Sunday League Team Regular) and his Dad Arral, who was in town from California. Perhaps the Jacksons took some inspiration from their other sibling, an NU Womens’ team player from the late 90’s/early 00’s looking down from the pictures on the wall of the Combe Center. 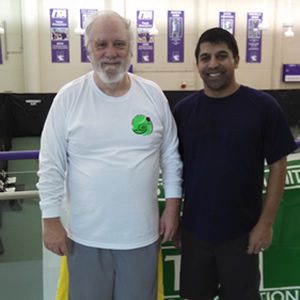 Great play from the semis came from the teams of Ray Boyer/David Fenn (regular tourney stalwarts) and a new Chicago contingent of Mark Brodner/Cate Brodner.

The Women’s Dubs had the very competitive duo of Julie Colhoun/Ginny Lazarus run into another great team from Chicago comprised of Mary DaVanti/Amanda Ellsworth.

The first time tandem from the Windy City (in an ecta event) prevailed in a close 10 game pro-set.

Come and hit some balls and hang out with the Men’s and Women’s Tennis teams on Sunday January 11th 6-7:30pm at the Combe Tennis Center.  All levels – all ages are welcome to get to know the players and coaches!

Look forward to seeing you all on Sunday!

Round Robin Doubles Tournament — First Round matches of 8-game pro-sets per group on Saturday. Winners advance to single elimination 10-game pro-sets on Sunday. Start times to be determined by draw sign-ups. First matches may start at 9:30.

Players may register for only one event.
Registration Fee: $25.00 per person, plus 2015 ECTA yearly membership fee of $25.(Good to cover all leagues and tournaments for full year).